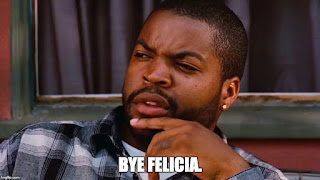 "Who needs enemies when you have friends like that." -My Mom

Like I said before, my mom is amazing. I would tell her stories growing up about what some of my school "friends" had done or said to me, and she would respond with the above. I didn't know then but hearing this over and over again makes you analyze your friendships without even realizing it.

When your halo Breaks you find out who your friends are, something I talked about in my last post.

You also find out who your friends aren't. You and I both know we have or had people in our lives we knew were just their for the ride. When you're on top, of course, you have a lot of people surrounding you. Some of this you expected but there are some people that were just along for the good ride that you didn't expect and that is difficult to deal with. People you thought would be there, but are nowhere to be found.

1. "What will people think" friend
Not going to spend a lot of time on this one because frankly, it's not worth it. This friend has and always will be about themselves. They were with you during the good times because, well let's be honest, your friendship made them look good. Now that your halo is broken and your status no longer improves their status. You don't even have to tell these friends bye. It's likely they've ghosted you at this point anyhow.  In the word of Jay-Z "Brush your shoulders off" and keep trucking. These friends were takers anyway. Spent most of their time talking about themselves and never really brought anything of value to your life.


2. "I don't know who you are anymore"
I can't even read that title without rolling my eyes. People that say things like, "I don't even know who you are", or "what happened to you", never really knew you. Either you never let them close enough to know who you really are or they never cared enough to find out. The people who really know you aren't surprised by your broken halo experience.

The people who really knew me weren't surprised that I had fallen. Don't get me wrong they didn't send up any warning signals either, but they saw what was going on, and when I broke, they simply said: "yea, I can see how that happened".

These friends may linger around, but it is up to you to decide which ones are lingering because they're nosy and which ones actually care. Tell the nosy folks bye, but give the others a chance. Maybe they've wanted to get close and know you for a while and you never let them in because you were afraid of how they might react to your "Dark Passenger" (I'm going to adopt this phrase now that I've already used it twice, Thanks, Dexter). You may have been wrong about them. They know how broke you are and they're still around... they might actually care.

This is a hard one for me. Mainly because I love people and a lot of these friends were fun to be around. These guys know how to kick it and have a good time. You have become low on their priorities list. You don't get the invites you used to because you don't mix with some of the people they mix with now. You have a brokenness and a drama that may or may not be your fault but it is a reality, they're not going to give up their friends to be your friend, but when it's convenient they'll be around.

For me, the hardest part about this group is the constant feeling of rejection. You see them out on social media having a good time with people you used to have a good time with. You invite them to things and there is always something going on, and they've gotten to the point that they don't even give you a reason. It is really hard for me to continue to put myself out there.

Don't count on these people. By putting them in this category it may help you deal with them. It hurts because you probably thought they would be different, but you were wrong, and that's OK. You can call them on their BS, or be passive aggressive on social media, but you and I are bigger than that. Who wants a pity invite or a pity friend anyway. Let them do their thing, you do your thing, and when your paths cross have a good time.


The Good In It All
One of the good things about broken halo experiences is the pruning that happens in your social life. Pruning always hurts but it makes room for healthier things to grow in their place. Get out and make some new friends if you need them. It's likely you have found some of your real friends in this process. Just enjoy what you have and say a silent thank you for the removal of the junk in your life.