Guns and School Shootings in a World of Broken Halos

I was 13 when Columbine happened. Anytime you can reference an event with one word you know it was impactful. It was the beginning of what is now become the norm. When the Sandy Hook shooting happened it hit home in a much different way because I have kids in elementary school. These are kids with their entire lives ahead of them. It is one of the saddest things in the world. I can't imagine what those parents are going through and I don't want to imagine it. 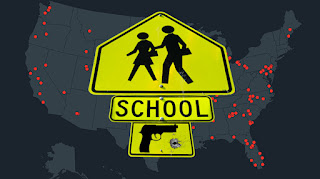 I'm writing this post a little off of topic from the Broken Halo's theme, but in all reality, we are dealing with very broken people. My hope here is to look at the sides everyone is choosing and hopefully address some solutions with logic.


A realistic view of gun control
I don't own a gun. I am not super comfortable around them. I haven't handled them enough so they make me a little nervous. I don't think there are a lot of people in our country who believe that unstable people should have access to guns. I think we all agree on this. That being said, there are a few things that are pretty clear.

1. Passing more gun control laws won't take guns off the streets. There is in the neighborhood of 300 million guns privately owned in the US. If you stopped selling guns all together there are still enough guns for each adult in the US to have two.

2. Passing gun control laws seems nearly impossible. We have split down the middle on this. Half the people will never be satisfied with enough restrictions, while the other half will fight against even one more.

3. Passing more gun laws only keeps honest people from getting them. You can't argue this. With 300 million guns already owned, if someone wants a gun they are readily available. All this does is increase the number of black market deals. People with enough resources will always get what they want, and people in hard times will always cut deals for extra cash. I'm aware of people who have their girlfriends buy a gun for them, because they can't legally buy one.

Video games, The Walking Dead, and Youtube
When Columbine happened I was a huge DOOM fan. I remember the talk then that video games and other 1st person shooters were the reason for such carnage. Realistically, there have been around 150 mass shootings, not school shootings, in the last 60 years. The most popular FPS (First Person Shooter has sold 30 million copies of Modern Warfare 3 in 2011. It just seems like a reach to blame something like this that hasn't affected, to this extent, the other 299,999,990 people who play the game. Are we desensitized to gore and violence thanks to popular shows like The Walking Dead, or the crazy disturbing things on youtube? Absolutely! Not sure it equates to mass shootings though.

These people knew what they were doing. They didn't think it was a video game and that people would get a second life. They wanted to kill people. They have deeply hurt individuals. They showed signs that got overlooked or ignored.

Short-Term Solution
What can we do now?
The most prized possessions in this country are guarded by security. If you have ever flown in an airplane it is likely that there was an air marshall on board. The White House is heavily guarded, I am not talking about the armed military at the doors. Soldiers with automatic rifles could cause some anxiety and distraction, but trained security in civilian clothes at each school would be nice. There isn't an air marshal on every flight, but knowing you might have one would at least deter you to a degree. Our most prized possessions also require you walk through a metal detector. Is it sad that it has come to this? Yea it really is. If I had to pick a school or city for my kids to go to, all things being equal, I'd pick the one with a metal detector and a school marshal on staff.

I do believe that mental health issues are on the rise. I also think we live in a world that over medicates, under disciplines, and is off of its moral compass. We are seeing a crisis in sexuality, absent parents, and kids overloading on social media at a very young age. Our kids now are dealing with things I didn't deal with 15 years ago.

Maybe this seems trite, but our kids need our attention and to feel loved. We won't stop bullying in schools, but we can stop it at home. Our kids may not feel appreciated on Instagram, but we can marvel at their unique gifts at home. They might be weird and anti-social in public but they need to know they are of immense value to you.

Hug your kids, turn the wifi off, and play a board game.

If you think I have lost my mind please leave a comment.